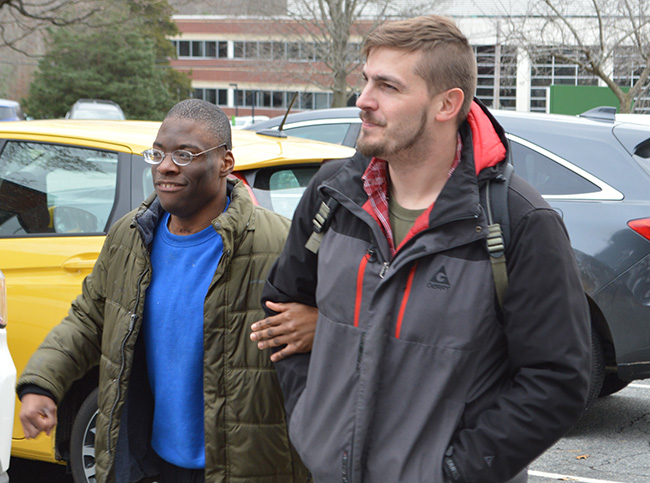 Andrew Kilgore walks with a student outside The Guild.
May 6, 2019

Teacher making a difference in the lives of his students

For the 12 years he worked for and later helped manage the Boston Chinatown Neighborhood Center’s after-school program in the Josiah Quincy Elementary School, Andrew Kilgore often fielded one particular question.

“You are so good with the kids, why don’t you become a teacher?” parents and colleagues would frequently ask him.

“Someday” came in 2014 as Andrew took the first step to becoming a teacher when he simultaneously joined The Guild for Human Services and enrolled in a program to obtain his master’s degree in education through a partnership with Bay Path University.

After stints as a job coach and teaching assistant at The Guild School, Andrew has served as a teacher for the last two years. He and his three teaching assistants work with a group of five students ages 17-18 in a classroom focused on developing the students’ expressive and receptive language skills.

Andrew and the rest of The Guild’s talented, dedicated teaching staff will be honored this week as part of Teacher Appreciation Week, a week-long national celebration designed to highlight the life-changing impact that teachers have on their students every day.

“I have enjoyed watching Andrew grow as an educator over the years,” says Sharon DiGrigoli-Couture, The Guild’s chief education officer. “He believes in his students, and while it may take time, work and repetition, he pushes them to meet their greatest potential.”

For Andrew, some of his most memorable moments as a teacher come when students show progress. For one student, the breakthrough came after 1 1-2 years, when she finally felt comfortable enough to leave the classroom to attend adapted physical education and music classes in another part of the school. “That was huge,” Andrew recalls. “Those are big moments that don’t happen every day.”

Other special moments come more frequently, such as when a student shows Andrew the song he is listening to on his iPad as a way of indicating that he likes the song, or when another student creatively develops new ways to use classroom materials to construct objects. “I get great satisfaction from helping my students engage with their surroundings in a meaningful way,” he says.

Looking back, Andrew is grateful that his former colleagues and parents at the after-school program in Boston encouraged him to pursue a teaching career. He finds his work at The Guild to be personally fulfilling and extremely meaningful.

“At the end of each day, I feel emotionally and physically exhausted, but I know what I did mattered,” he says. “I know that all of that effort I expended made a difference in someone else’s life. It’s a tremendous feeling.”