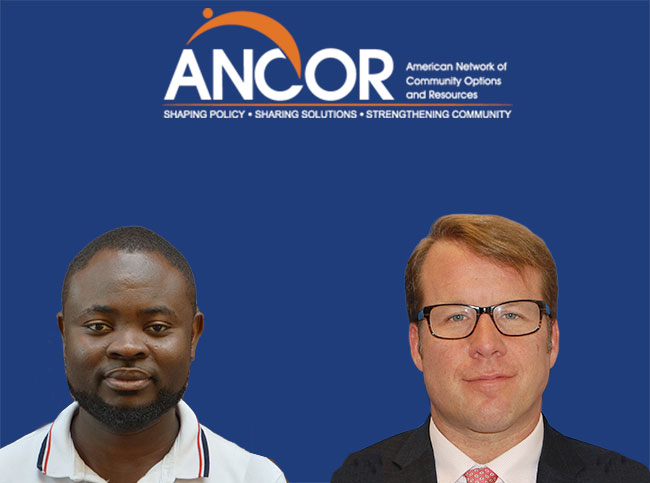 Guild for Human Services directors Mustapha Abdulai and Matthew Carmichael have been selected to participate in the ANCOR Foundation’s Leadership Academy, a two-year program to support their growth as leaders at The Guild, in the state, and in the national intellectual and developmental disabilities community.

Mustapha, director of residential services since 2017, and Matthew, who was appointed director of human resources in 2015, have worked at The Guild for a combined 21 years. They were chosen for the Leadership Academy’s Class of 2022 earlier this year and will begin their orientation in April.

“The Guild is proud that ‘Mus’ and Matt were named to participate in this prestigious, national career-development program,” says

Maureen Costello-Shea, The Guild’s chief program officer. “The Leadership Academy will not only position them to further help enhance the services we provide to individuals at The Guild, but to contribute to state, regional, and national discussions about improving service delivery to people with intellectual and developmental disabilities.”

During his time at the Leadership Academy, Mustapha will focus his attention on developing a comprehensive plan to create career paths for Guild direct-care staff so they will choose to remain in the field. Matthew will direct his energies to establishing a culture of coaching at The Guild so staff can better support and learn from each other.

“The Leadership Academy is a great opportunity for me to learn from peers around the country about what they are doing overcome the challenge of employee turnover,” says Mustapha, who joined The Guild in 2011 as a temporary direct-care staff member.

“For me, this will be like going back to school,” says Matt, who joined The Guild in 2008 as an employment service coordinator. “I want to discover from other participants how they created a culture of coaching at their organizations.”

The Leadership Academy, which was launched in 2017, helps mid-career professionals to build on their areas of expertise and develop into thought leaders in the national intellectual and developmental disabilities community. Instruction and support are offered to participants through webinars, discussions with academy coaches, peer groups, and mentoring circles.

ANCOR (American Network of Community Options and Resources) is a national, nonprofit trade association that represents more than 1,600 private community providers of services to people with disabilities. ANCOR advocates for private providers before Congress and federal agencies.