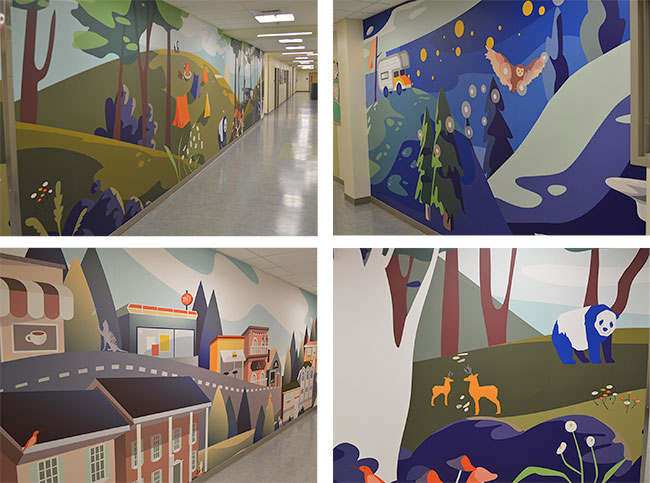 Transforming The Guild School's house into an inviting home

Gone are the sterile white walls, replaced by large, evocative murals that greet students, staff and visitors to the Ocean, Forest and Neighborhood. Break rooms now bear the names of favorite animals. Welcome to The Guild School 2020.

Students and staff returning from winter break last week were met with a warm, artistic embrace, courtesy of a series of compelling murals and room signs created by youth from

Artists for Humanity (AFH) working in collaboration with The Guild.

“Now The Guild School looks like what we are – a joyous place inhabited by a community of people who care deeply for one another,” says Amy Sousa, The Guild’s CEO. “Art is not just about beautifying a space, it’s about identifying that space and the people within its walls.”

When Amy joined The Guild as CEO, the school had recently moved from a cozy but cramped facility in a Waltham strip mall to a 60,000-square-foot building in Concord. The new school featured high ceilings, wide hallways and natural light, but the institutional white walls and lack of student art made it feel more like a hospital than a school.

To help turn a state-of-the-art house into an inviting home, The Guild forged a partnership with AFH, a Boston-based nonprofit organization that provides under-resourced teens a pathway to self-sufficiency through paid employment in art and design. The project was funded by a Guild grant to support individuals with low vision as well as orientation and mobility challenges.

With the support of AFH senior graphic designer/studio manager Kelsey Arbona, youth artists “Pineapple,” Iris and others partnered with Guild students and staff to understand the culture of The Guild and develop art that would be both expressive and functional.

“Groups of youth that are often seen as very different came together to develop this truly amazing project,” Amy says. “The collaboration allowed the young artists to capture the essence of The Guild.”

The project is not complete. In mid-January, AFH will install directional signs. Three interactive pieces are scheduled to be added to the Neighborhood, the portion of the first floor that encompasses the cafeteria, gym and fitness room.

An open house is being planned for the spring to showcase the wayfinding project for Guild families, friends, local artists and Concord residents. “We’re looking forward to presenting our new space for everyone to see,” Amy says.