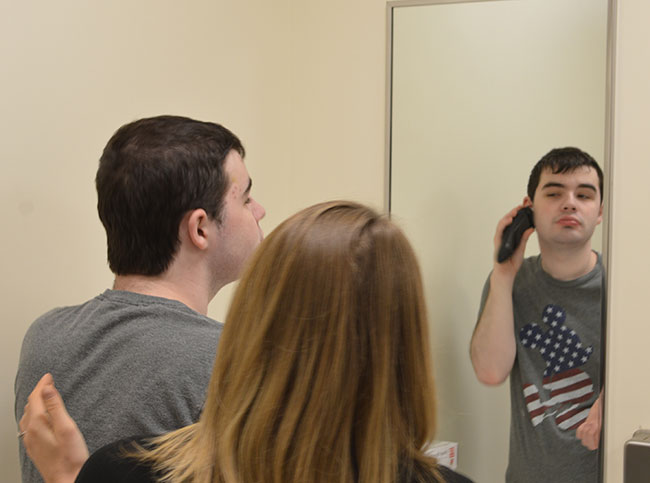 With help from The Guild’s occupational therapy team, it’s a close shave for Peter

Once reluctant to shave at all, Peter Anastasi now confidently gives himself a close shave with an electric razor.

“I like shaving,” the 21-year-old tells Nicole Anulewicz, his occupational therapist at The Guild School, during a recent OT session.

It’s a sentiment she might not have expected him to share when they first started focusing on the self-care skill as part of his Individual Education Plan (IEP) in June. Disinclined to shave initially, he can now accomplish all of the required steps: locate the razor, turn it on, bring it up to the proper location on his face, shave, and then turn off the razor, clean it and put it away.

“He’s made very good progress,” Nicole reports. “The whole session is so fluid, he can often proceed with very few prompts.”

Peter’s mother, Karen Connors, and Nicole agree that Peter’s breakthrough in learning to shave came when Nicole visited Pine House a couple of times to work with the residential staff there. Nicole reinforced the principles and techniques that she used with Peter during their OT sessions at school. Generalizing the required skills empowered Peter and increased his familiarity with shaving both in his residence and at school.

“Once she started working with him on shaving at the school and then generalizing it to the house, it made all the difference,” Karen says. “He’s improving all the time. It’s exciting to see.”

Peter is one of the many Guild School students who are served by the capable four-person OT team, led by Brinley Sullivan. About 80 percent of The Guild School’s population is served by our occupational therapy team, who meet with students individually and lead a weekly session in every classroom.

In addition to helping Peter refine his shaving skills, Nicole also works with him on other personal growth and development goals designed to advance skills in other activities of daily living: using a computer, cooking for himself and doing laundry.

Already skilled at typing on a computer, Nicole is assisting Peter with improving other computer skills: logging in, adjusting settings, finding email recipients and, ultimately, sending emails to his loved ones. In addition, the pair are partnering on enhancing Peter’s skills in the kitchen. He’s comfortable using a microwave, blender and other simple kitchen appliances – for instance, he can independently make macaroni and cheese – so now Nicole and Peter are working on safely operating the stove and oven. As for laundry, Nicole is teaching Peter sorting and folding, necessary prerequisites for learning how to wash his clothes.

“In working with Peter, I have observed that he’s now less dependent on prompts from me and has demonstrated significant growth,” Nicole says. “You give him something to do and he’s really motivated to get it done. He knows what he has to do and shows that he has the skills to get the tasks done.”