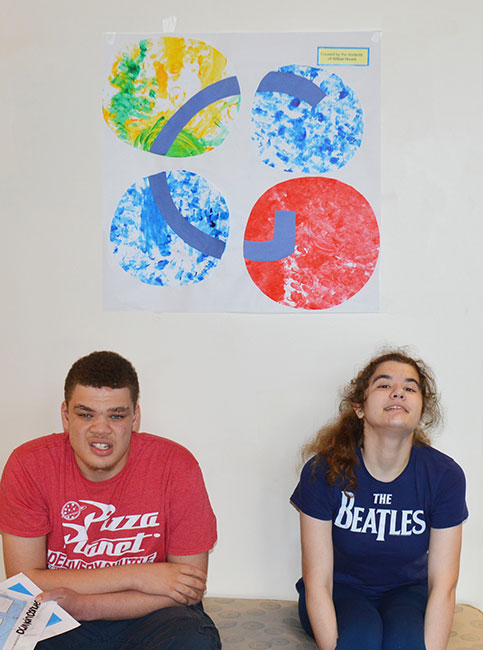 Doran (left) and Erin were elected vice president and president of the Student Council.
January 3, 2020

The newly created Student Council is already making an impact on the lives of Guild School students — both council members and the rest of the student body.

Since its establishment in November, the 18-member council has held an inaugural meeting, hosted a bake sale and organized an event: a festive holiday-themed pajama and pizza party that brought together students and staff on December 19.

The council took shape in early November with the selection of four officers (president, vice president, secretary and treasurer) who were nominated by staff. The rest of the council was selected on November 8 — Election Day at The Guild — as students had the opportunity to vote for representatives for each of the 14 classrooms.

Class by class, students made their way to The Guild’s computer lab to cast their votes. Smart boards were set up to function as voting booths and students completed voter registration forms prior to voting. Even students who had difficulty navigating to the computer lab were able to vote by absentee ballot.

The launch of the Student Council was part of November’s educational module in celebration of civics month. “The goal of the themed instruction was to teach students about the voting process, the meaning and purpose of a student council, and what it means to have representation in everyday decisions that impact their lives,” says Andrea Edmunds, the interim director of related services at The Guild.

Together with staff advisors, officers led the first Student Council meeting with classroom representatives on November 21. For its holiday celebration, the council voted overwhelmingly to host a pajama and pizza party rather than a movie night. The students hosted a holiday bake sale on December 12 to help raise money to fund the party.

“The goal of The Guild’s Student Council is to represent, preserve and protect the interests of all Guild students,” says Annemarie Gormley, a speech-language pathologist. “The council provides a sustainable structure for our students to learn and practice advocacy for themselves and their classmates, and create a forum where students’ ideas and opinions can be shared.”

The formation of the Student Council represented the culmination of months of planning by Michelle McGonagle, The Guild’s director of mental health services, and the speech and language department. Teachers, teaching assistants and specialists also contributed. “We couldn’t have made it happen without them,” Andrea says. “It really has been a group effort.”