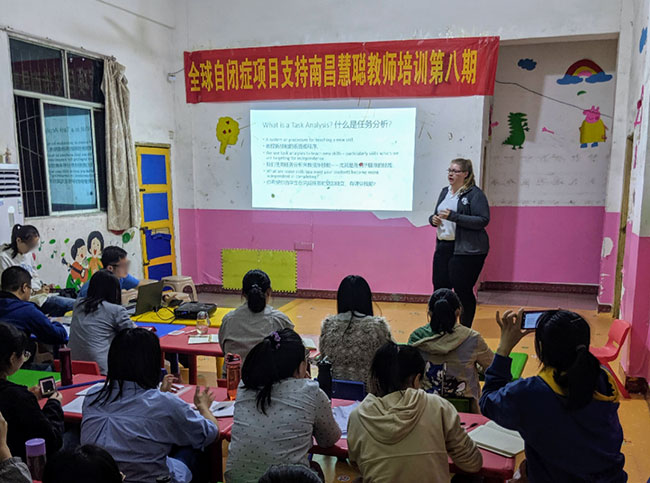 Since her undergraduate days at Southern New Hampshire University (SNHU), Chelsea Parrott has wanted to participate in a Global Autism Project overseas trip to help support the development of a center or school for children with autism.

In October, the clinical assistant on The Guild School’s behavior support team did just that, traveling to China with a team of three other professionals to conduct a site review of an autism center in Nanchang, a city of more than 5 million people in the country’s southeast.

Chelsea first learned about the Global Autism Project (GAP) from a professor at SNHU and yearned to join the organization to combine her deep interest in autism education with her love of travel.

“It was an incredibly interesting experience,” Chelsea says of her trip. “I had some preconceived notions of what I would see – and I was actually totally wrong. I thought the center probably needed a lot of help and had a lot of deficits. That turned out not to be true.”

After a weeklong training session in New York, Chelsea and her three colleagues traveled to Nanchang for a two-week visit to the Huicong Autism Center. The center, which serves more than 100 children, was founded by a mother who had struggled to find an appropriate educational placement for her son with autism. According to Chelsea, the Huicong center has been part of the Global Autism Project for three years and has made significant progress in meeting the needs of its students since adopting the program enhancements suggested by GAP educators.

While there were many similarities to the services offered at The Guild, Chelsea observed key differences as well. For instance, all students are accompanied by a parent for the entire school day, although the parents do not attend their child’s individual therapy sessions with educators. Parents do participate in group therapy sessions, which are held three times a day. Due to the Chinese government’s restrictions on internet use, educators do not have access to curriculum development plans, peer-reviewed articles or other valuable online resources.

Among the center’s positives that Chelsea’s review group identified were twice-weekly supervision sessions in which senior teachers meet with their junior colleagues, and the considerable parental involvement. Areas for improvement include organizing group sessions based on students’ skill sets and developing programs to train both teachers and parents.

Chelsea returned to The Guild with a greater appreciation for the school’s student-centered approach and commitment to individualized learning, while developing a cross-cultural perspective on autism education in another part of the world.

“The trip really changed my outlook on my job specifically and the field in general,” Chelsea says. “I learned so much on the trip that I can apply to my work at The Guild. I’m looking forward to participating in another Global Autism Project soon.”