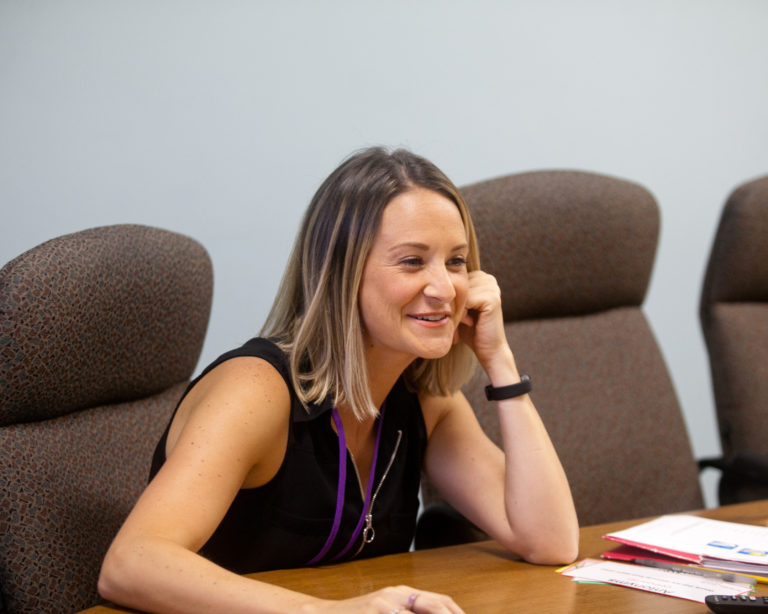 Emily Calden explains her work at The Guild for Human Services simply: “It’s somewhat of a mission of mine,” she says, “to give a voice to students who don’t have one.”

A teacher who has worked at The Guild for eight years, the last seven as a speech therapy assistant, she is particularly drawn to the non-verbal students she sees. She works in both one-on-one and group settings to help her students communicate their desires, express their feelings and socialize.

The transformative breakthroughs rarely come quickly and may take years of hard work to achieve, but the feeling is always the same for teacher and student when they happen: utter joy and immense pride. “It’s just really rewarding work,” the Bridgewater State University graduate reports. “I can’t think of anything I’d rather be doing in my life. The students inspire you to do your best to help them reach their potential.”

She tells of one student who a few years ago had grown so frustrated with his inability to communicate that he would routinely overturn bookshelves or act out in other ways. By learning to string together picture symbols in his communication book to form sentences, he can now communicate with others: I want help. I want to go on a walk. I want hot sauce. “It makes me feel really good that he can communicate,” Emily says. “His quality of life has increased dramatically since he got here.”

On a recent day, Emily used a social story to explain to one of her students who typically has difficulty accepting change that her long-planned weekend visit home had been postponed. Instead, her parents were going to visit her sister at college. Emily expected her student would be upset and a protracted discussion about her feelings would ensue. Instead, her student read the story, understood immediately and said, “That’s so nice that my parents are going to visit my sister.”

“I told her how proud I was of her that she could be happy for her sister and her parents,” Emily recalls. “Those are the moments that make the work so worthwhile.”