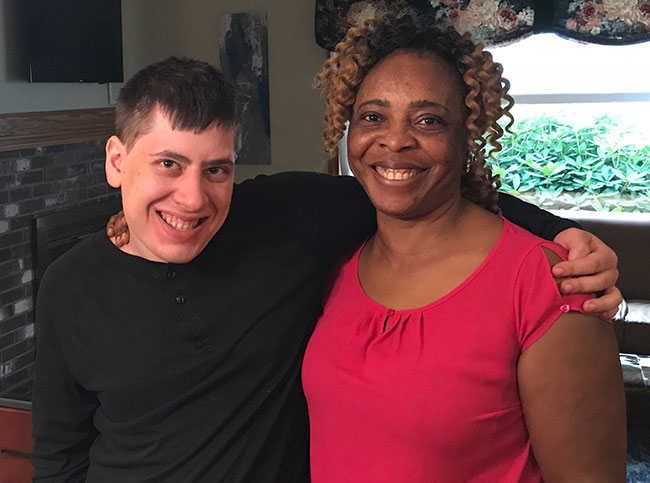 Just a year ago, Daniel Sedov spent much of his time alone in his room, interacted infrequently with other people and often neglected his own personal care. Not anymore. Since joining The Guild for Human Services’ Walpole House, the 23-year-old looks forward to participating in his day program through Willow Tree Habilitation, has developed a camaraderie with his housemates and staff, and manages his morning and evening care needs with minimal assistance.

“I’m so proud of my son and very appreciative of the efforts of the staff at Walpole House who made this happen,” says his mother, Alla, citing the work of Gamaliel Amaniampong, the house’s program manager, and Estella Ngufor, lead residential assistant.

Daniel suffers from a rare chromosomal epilepsy syndrome. He might have several seizures in a single day or go days without suffering one, but The Guild staff has not allowed his condition to prevent him from leading an active life.

Last year’s transition to Walpole House was not easy at first, since he was accustomed to playing video games or watching television alone in his room at his previous out-of-state placement, which ended when he turned 22. But the Guild staff worked closely with Daniel to encourage his involvement in his day program, and he has become an enthusiastic participant.

He has grown particularly close to Estella, who has become like a second mother to him, according to Alla. “I’ve been with him since Day One and he trusts me,” Estella explains. “He has made great progress.”

As Daniel began to feel more comfortable at Walpole House, he became more sociable, showed his sense of humor, and exhibited his deep curiosity about science and electronics. He now joins his housemates to cook, clean, go grocery shopping and perform other household tasks. He’s such an integral part of house life that, on a recent day, when one of his fellow residents was having a difficult time, he comforted him by saying, “We’re here to support you. We’re a family.”