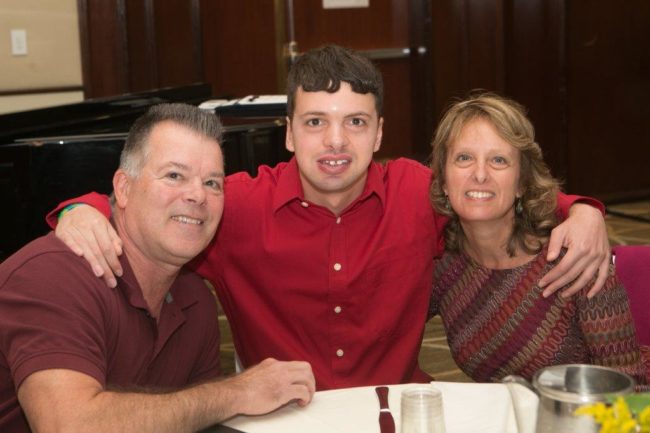 Plenty to celebrate on his birthday

It’s Kyle S.’s 26th birthday, and there’s plenty to celebrate for this resident of The Guild for Human Services’ Framingham House.

He just moved down the hall to his new room, which he is eager to show off to a visitor. He’s also excited about his mom Nancy’s birthday gift, a small baboon that immediately takes up residence in his vast collection of stuffed animals. He points out the recently earned Special Olympics swimming medals hanging from his bed post. His dad, Hank, calls on the phone to wish him happy birthday and they talk for several minutes.

Kyle enthusiastically joins in the preparation of meals; macaroni & cheese and chocolate muffins are his specialties. He also manages the house’s recycling needs. He enjoys engaging in conversation with both his peers and staff members.

Kyle’s parents have seen enormous growth in their son, who was the first resident of Framingham House when it opened four years ago. Hank often finds himself thinking, “Wow, that’s something that wouldn’t have happened a few years ago!”

“He is maturing, and I see growth in his understanding, resourcefulness, awareness of the here and now, and his emotions,” Hank reports. “I can see things that have come from him being enabled and taught to be an advocate for himself.”

Examples abound: Kyle makes an effort to engage the clerk at the store, enquires about his brother and sister and their friends, and connects places he’s traveling through in the car with activities he’s been involved with in those communities.

“He is a typical kid in so many ways,” Hank says. “It’s his enthusiasm that’s so wonderful. He’s a joy to be around.”

During the day, Kyle attends the Charles River Center in Natick. He participates in a variety of activities, including working for Meals on Wheels, Greyhound Friends, the Pearl Street Cupboard & Cafe and the Salvation Army. In addition to his work, he takes classes on preparing food and safe personal travel.

Kyle, who was diagnosed with special needs and developmental delays as a toddler, attended public schools and lived at home until the age of 22. When his schooling ended, issues began to arise, and he was admitted to Hampstead Hospital in New Hampshire.

To ease Kyle’s transition to The Guild, then-Framingham House Manager Mustapha Abdulai made frequent visits to the hospital to get to know him. Mustapha even took Kyle to the zoo, one of his favorite activities.

“To see the way Kyle is flourishing now is very gratifying,” says Mustapha, currently the director of The Guild’s 11 adult residences.