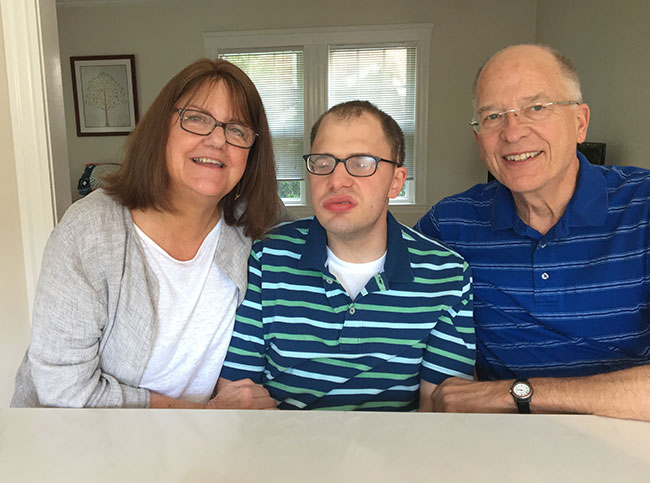 Giving back to The Guild community

For Peg Doherty, the concept of The Guild as a special community really hit home on Easter Sunday.

On that exact day a couple of months ago, her son, Christian, expressed his desire to return to his

residence at Sudbury House after spending a few hours visiting with his parents. They asked him why he wanted to go back so soon.

“Because I like being there,” he answered, a few words delivering a powerful message.

In Peg’s opinion, membership in a community – whether a fraternal organization, religious group or human services agency – carries with it a responsibility to support the institution in some way: offering time to help out, encouraging new members to join or making a monetary gift, for instance.

“In a community, people participate in a number of different ways,” she explains. “One of the ways people can participate in The Guild is donating at a level they feel comfortable with.”

Peg recently made a generous gift to this year’s Guild annual campaign, which closes on June 30. She strongly encourages other members of The Guild community to give online or by mail before the end of the fiscal year.

“I often wish I had more to give because we feel so strongly about The Guild’s mission and its dedicated team,” she says. “Christian has close peers and sees The Guild as his community. We didn’t think we would find a place where he would be so happy and we would feel so relieved.”

After being in numerous programs, Christian has lived at Sudbury House for the last three and a half years. She has seen stark differences between The Guild and other programs in areas such as residential employee training and enthusiasm; programming; respect for the individuals being served; and, of course, the feeling of community.

“You get a sense when you’re with the group that everybody is in it together,” she observes. “The staff have their roles, but they see the individuals they work with as equals. It creates a lovely, accepting, safe environment.

To make a gift, visit our online giving page.