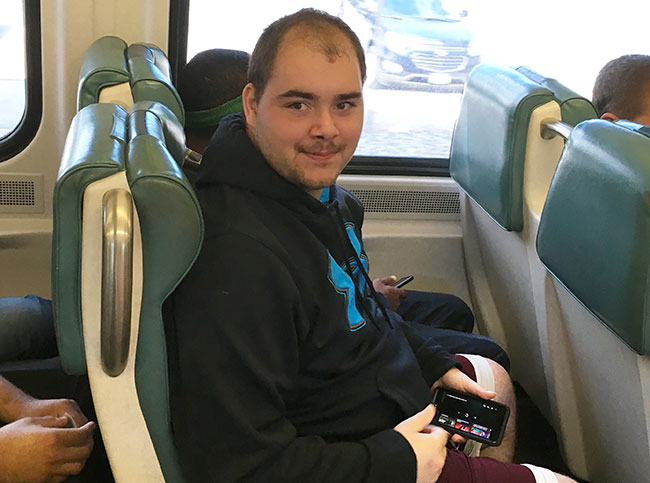 Although he first arrived at The Guild for Human Services nearly 14 years ago as a young boy, it’s not easy for staff to recognize Kevin Clark these days. The 24-year-old resident of Dedham House is a changed man.

While he was with The Guild’s youth residential program, he exhibited some challenging behaviors. He could be aggressive, so much so that his behavior frequently prevented him from participating in community activities. There was even some consideration given to discharging him from the program.

“I see a whole different person now,” says Laura Schooley, former Dedham House manager and now The Guild’s student services manager. “While we shared in some challenges with him during the youth program, he has made tremendous progress. Kevin is an awesome guy.”

For Laura, Kevin’s transformation was on full display when, last summer, he traveled to New York City for three days with several Guild friends. They stayed in a hotel; rode the train; dined in restaurants; and visited Times Square, Grand Central Station and many other places in the Big Apple.

“Kevin hasn’t had a lot of opportunity to travel long distances, so every moment of the trip was eye-opening to him,” Laura recalls. “The New York trip was the culmination of everyone’s efforts with him over the years.”

During the trip, Kevin was particularly interested in the New York City police, especially the canine officers. He purchased a large-scale city Lego set that he now proudly displays in his room at Dedham House, where he has lived for two years.

Mustapha Abdulai, director of The Guild’s adult residential program, attributes Kevin’s changed ways to his surroundings. Two of his closest friends from the youth program also live in Dedham House.

“Having his friends there created a community for him,” Mustapha says. “He learns when he lives with people who are more independent. He has also bonded well with the staff.”

At first, Kevin was occasionally reluctant to participate in his day program, Willow Tree Day Habilitation in Natick. However, he took interest in a leadership role and was appointed safety officer. He is responsible for checking that safety supplies are available, and that the fire alarm and sprinkler systems are operational.

“They need my help there,” Kevin reports.