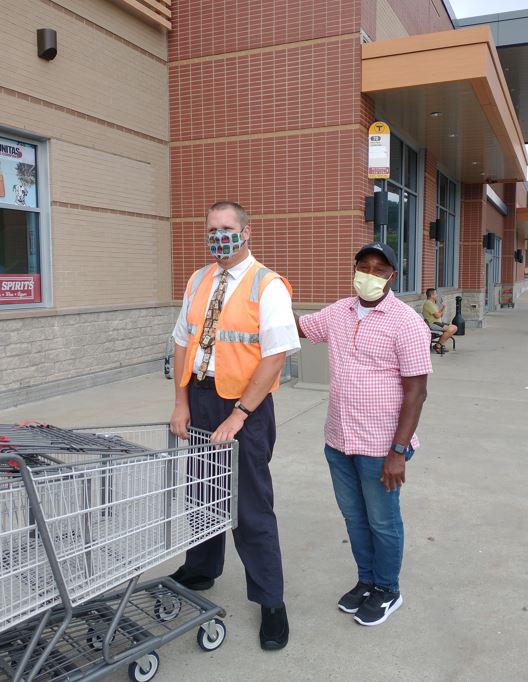 Evan, a resident of The Guild's Dedham House, packs up his bag every Monday, Wednesday, and Friday and heads to Market Basket in Waltham to work the mid-day shift. From 10:30-2:30, he directs customers and collects and organizes shopping carts within their corrals in the store’s parking lot.

“I work hard at pushing carts,” he says. “I enjoy it and get paid every week.”

Evan’s path to employment wasn’t without its challenges. His mother, Alice, explains that finding an adult day program that would prioritize his employment goals was extremely difficult. Staff with the first program he attended did not believe that he was ready for a job in the community, which was incredibly frustrating for both Evan and Alice.

Evan eventually transferred to a new day program, Autism Services Association. “Within the first week, the Executive Director called and told me they thought Evan could obtain a competitive job in the community. I fell off my chair,” says Alice. With training and the support of a job coach, Evan began working at Market Basket in 2016 and immediately found success. He’s been employed at their Waltham location for five years and continues to shift three days each week.

Junior Paris, Manager of Dedham House, says that The Guild continues to work closely with Evan’s job coach to provide tailored support and ensure that he has what he needs to succeed. “Guild staff also help make sure Evan is in the right frame of mind to go to work before each shift,” he adds.

Moving forward, Alice says that she’d like to see communities and employers become more accepting towards including people with disabilities across a variety of employment positions. “[With his first day program], I asked what we needed to do to get him ready for a job, and basically, the response was that he has to not be Autistic. I thought, "We can’t do anything to make a person with a good amount of skills successful?” she says.

Market Basket and Guild staff provided accommodations for Evan to support him in retaining the job long-term. When COVID-19 took hold in March of 2020, the crowds became overwhelming, and Evan was not used to wearing a mask for prolonged periods. Market Basket provided him with a short-term leave. During this time, Guild staff created special masks with the store’s logo and worked with Evan so he could tolerate wearing one. Staff also developed social stories to explain the importance of workplace safety. Within a few months, Evan was back at it and felt lucky to be able to work in a safe, outdoor environment throughout the pandemic.

In the future, Evan says he’d love to work at the Audubon Society in Lincoln in their maintenance department. For now, he’s excited to continue greeting customers with a smile during his weekly Market Basket shifts.