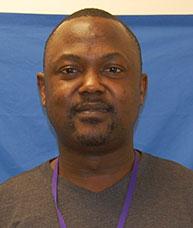 Walters started working at The Guild in 2017. Previously, he worked at Vinfen as a medication officer and at St. John's Health Center as a lead. He attended Saint Joseph's College, Sasse, in Cameroon and earned his bachelor's in psychology. What Walters likes most about working at The Guild is the teamwork and engagement between the individuals The Guild serves and the staff. In his spare time, Walters enjoys listening to music and research.