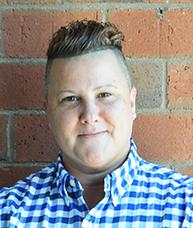 Kim started her career at the Guild for Human Services in 2001. Since joining The Guild over 21 years ago, she has worked in many roles within the youth residential program before taking on her current role as the Director of Quality Assurance and Compliance. Kim began her journey working in a direct care role and in 2004 she was promoted to a Residential Manager. In 2008, Kim transitioned into an Associate Residential Director role and later was promoted into the Director of Residential Services role where she remained until 2013. Kim currently oversees the Quality Assurance team which includes the Data Systems Manager and Quality Assurance Specialist. Kim also currently serves as the Guild’s Human Rights Officer and has lead the Guild’s internal investigation team for the past decade. In her spare time Kim enjoys spending time and “keeping up with” her energetic twins.