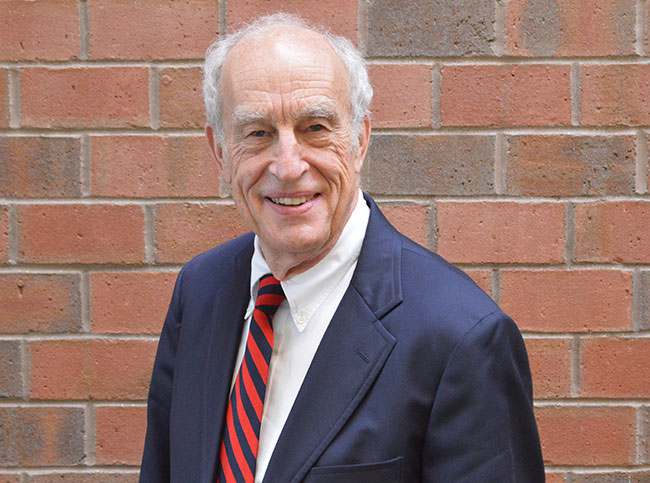 Board leader retires after 15 years

Eric H. Rosenberger retired last month as president of the Board of Trustees, marking the end of his family’s seven decades of distinguished service to The Guild for Human Services.

From its founding in 1945 as The Protestant Guild for the Blind, the organization greatly expanded its reach and range of services under the Rosenberger family’s leadership, strategic guidance and philanthropic support.

Eric’s father, the Rev. Andrew G. Rosenberger, joined the Board of Trustees in 1949 and served as its president from 1961 through 2007. During Andrew’s presidency, the Guild shifted its focus from youth with impaired vision to the growing population of students requiring special education services. The Guild now serves 140 children, adolescents and adults with mild to severe intellectual disabilities, autism and behavioral/mental health challenges at a private school, eight group homes and 11 residential homes.

“I was privileged to have had the opportunity to work closely with the professionals who are so dedicated to the families and individuals we serve,” Eric said of his tenure with The Guild. “I’ve been very fortunate to have had that experience in my life.”

Eric, who joined the board in 2003 and became president in 2012, was instrumental in The Guild’s move from its longtime home in Waltham to a much larger, more functional space in Concord in 2016. He also helped The Guild broaden its offerings through the addition of a residential program for adults in 2014.

“From my point of view, the kids always come first,” Eric explained. “I feel gratified that this continues to be the foundation upon which The Guild operates.”

Eric believes The Guild is poised for continued success under Thomas P. Corcoran, the new board president, and Chief Executive Officer Amy C. Sousa. They each praised Eric and his family for their contributions to The Guild.

“For Eric, every decision was always made through the lens of what’s best for the kids in the program,” said Thomas, who joined the board 10 years ago. “The Rosenberger family’s level of commitment to The Guild has been extraordinary. It speaks to their compassion and empathy for those we serve.”

“It is difficult to overstate the Rosenberger family’s impact on The Guild,” Amy said. “Thanks to their dedication, foresight and leadership, The Guild has been able to educate, encourage and empower thousands of individuals over the years so they could achieve their full potential to lead high-quality lives and participate meaningfully in society.”